The Surin Province, known to both Thai people and international tourists as the “Land of Elephants” is host to the annual Elephant Roundup Festival where more than 300 elephants are showcased in traditional and nontraditional events during the month of November. This will be an unforgettable sight of hundreds of elephants walking up and down streets in Surin, which has happened for the past 50 years, beginning in 1960.

Traveling a little less than 300 miles east of Bangkok, Surin serves as one of Thailand’s major agricultural areas, making it a beautifully landscaped province with tree lines extending as far as the eye can see.

At the start of the festival, elephants are set to parade down the streets, but among the crowds of people lined up alongside the road there were hundreds of fruits and vegetable stands lined up as well. The food won’t be for the patrons, but for the elephants to feast. They are gentle giant friends to many Thais in the area. 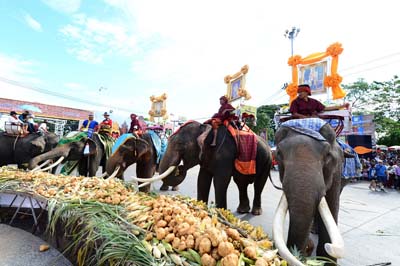 To kick off the parade, beautifully crafted floats will make their way down the streets with men running alongside each float holding very long sticks to raise power and telephone cables so that the floats could pass under safely. Along with the floats, local school bands usually march down in uniform formation blasting their horns and hitting their drums announcing the grand entrance of the grand animal.

The first elephants will typically carry local and other government officials through the streets to greet local patrons. After about one hundred or so elephants, the marching bands announce the entrance of the war elephants. Dressed in war regalia and standing more than 12 feet tall, these elephants presence is pronounce; you will know right away that anything coming in their path could easily be rammed off the road or hit with their large tusks. 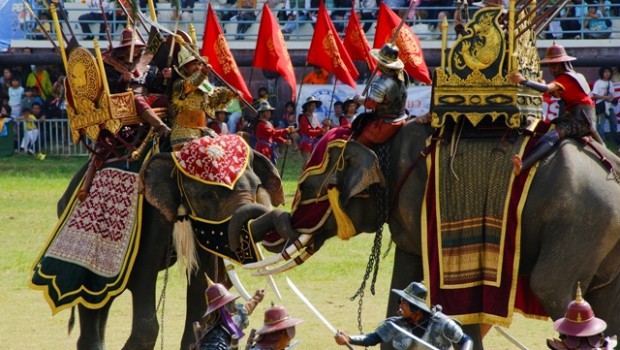 There are also other activities and shows patrons can watch. This past year, the festival had reenactments of ancient battles where elephants played a pivotal role in victory. The larger elephants mounted with warriors made their way out alongside hundreds of sword and spear wielding foot soldiers; they appeared child-like as the elephants showed off warfare techniques and skills.

After the festival, several locals and patrons dine at Noi & Norbert Restaurant & Mini Market, which is roughly a 25 minute walk north of where the primary show occurs. This restaurant serves German food as well as Thai food and other western dishes upon request, but their pizza is by far the best in Surin.

You leave the festival and celebration feeling the history of the relationship between man and elephant in Surin. The integration and tradition of this great animal in the province was displayed beautifully throughout the festival; I definitely recommend this as a top festival to attend in Thailand. Where to Celebrate Songkran in Thailand 2017 5 Thai Dishes to Try During Songkran