The Thai Holiday Spirit: From A Christmas to Remember to Amazing Thailand Countdown to 2014

Christmas may be over and people are considering their New Year’s Eve plans, it is hard for me to not reminisce about my experience of celebrating Christmas in Thailand a few years ago. Plus, what better way to ring in the New Year than celebrating across various parts of Thailand?

A few years ago, we walked along Ratchadamri road and that’s where we saw Bangkok’s amazing Christmas spirit. Step-by-step, we began seeing more lights and decorations around us, and I thought, “Wow this is nothing like Manhattan’s 5th Ave light show.” Right off the Ratchadamri sky train station, we walked past The Four Seasons Hotel, The Peninsula, The Grand Hyatt Erawan Hotel and Amarin Plaza, and all appeared to be in the festive spirit. The amount of lights all the hotels had made me forget that there was a dark night sky over my head.

We then began our walk along Ratchadamri road and that’s where we saw Bangkok’s amazing Christmas spirit. Step-by-step, we began seeing more lights and decorations around us, and I thought, “Wow this is nothing like Manhattan’s 5th Ave light show.” Right off the Ratchadamri sky train station, we walked past The Four Seasons Hotel, The Peninsula, The Grand Hyatt Erawan Hotel and Amarin Plaza, and all appeared to be in the festive spirit. The amount of lights all the hotels had made me forget that there was a dark night sky over my head. 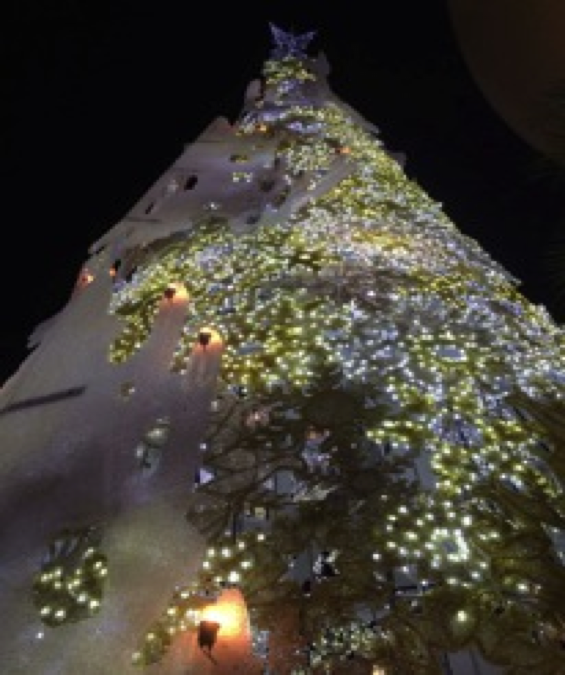 The Four Seasons Hotel had a big tree lit on its front steps. The Peninsula Plaza had all the Christmas light decorations including a gingerbread house and reindeer barn. The Grand Hyatt Hotel had a big plaza with plenty of lights to keep you looking on the whole night.

There was also the skywalk, which is passed the McDonalds around Amarain Plaza that allows you to gawk at the impressive tree in front of the InterContinental Hotel on the other side of the road. As we continued on the skywalk, we came across stairs that led down to the Central World Square where we were greeted by friendly beer stands and beautiful beer gardens buzzing with people from all over Bangkok.

Full of beer and fun songs, we continued to the Siam Paragon shopping mall to check out more lights. The mall has a line of palm trees in front that seemed to be gowned in purple lights that set the mood throughout the entire shopping mall. The inside was equally decorated with wreaths and more lights; a beautifully familiar sight to walk through. 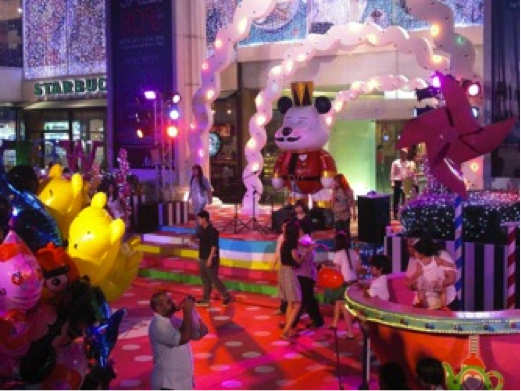 It may not be a main holiday in Thailand, but the beautiful people of this country always know how to make others feel at home during Christmas time.

That was my Christmas to remember – an experience very different from my time in New York. Now that Christmas is over, many Thais and travelers visiting Thailand are preparing for the New Year’s celebration for 2014! To ring in the new year, Thailand is organizing the “Amazing Thailand Countdown 2014” in seven major tourist destinations up and down the country – Bangkok, Chiang Mai, Chon Buri (Pattaya), Songkhla (Hat Yai), Phuket, Khon Kaen and Chiang Rai. Enjoy these festivities and hope to see you there! 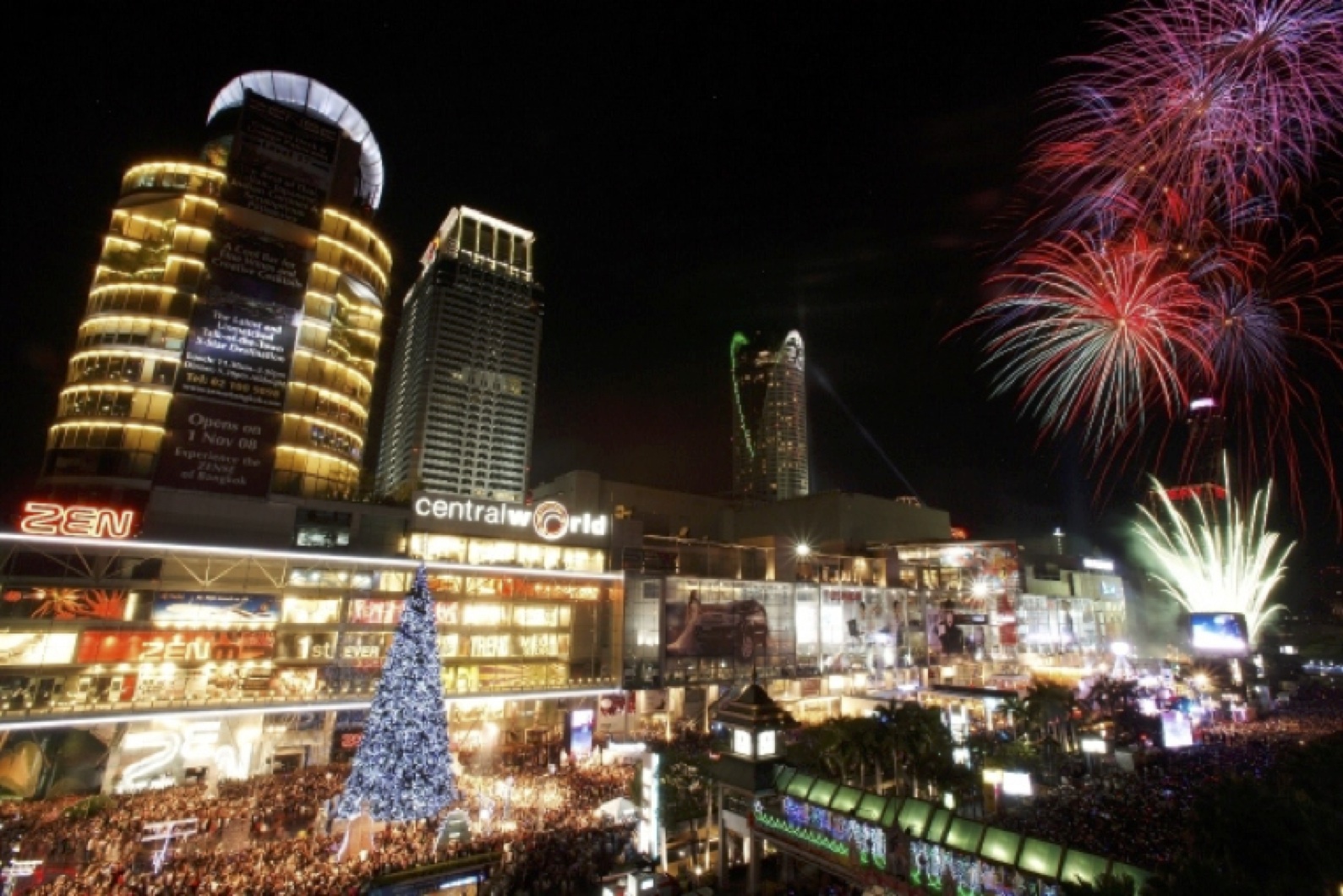 THAI LIVE CAM – The “THAI LIVE CAM” will stream live from Thailand (currently including Chiang Mai, Koh Samui, and Nhongkhai). You can  livestream  the beautiful beach scenery in the palm of their hands, check current weather, and see upcoming events in Thailand by downloading this app from App Store or Google Play (free of charge). For more info visit http://livecam.tourismthailand.org.

Lebua Hotels & Resorts – This New Year’s Eve, Thailand will welcome a new, epic countdown: The Bangkok Ball Drop at lebua. The Bangkok Ball will begin its descent 10 seconds before midnight from the top of a pole 64 stories above the city on the rooftop of the Tower Club at lebua hotel – making it the world’s highest New Year’s Eve ball drop. Preview the magical event: http://www.lebua.com/BBD

Bangkok Countdown 2014  at the city’s Ploen Chit, Ratchaprasong and Pathumwan Intersections from 31 December, 2013 to 1 January, 2014, which promises to be a fun-filled event with concerts by famous Thai and international musicians, stage entertainment and a spectacular countdown fireworks display.

Chiang Mai Countdown Festival 2014 will take place at the historic Thapae Gate and down the entire stretch of Thapae Road from 25 to 31 December, 2013. Activities will include mini-concerts by well-known Thai artists and bands, fun stage performances and displays of the local culture, leading to a massive fireworks display on New Year’s Eve.

Chiang Rai’s Three Nation’s Countdown 2014 in Mae Sai district takes place on 31 December, 2013, and into the early hours of 1 January, 2014. There will be stage entertainment that showcases the culture of the three Golden Triangle countries – Thailand, Lao PDR. and Myanmar -which will fascinate and entertain before midnight’s musical fireworks display.

Pattaya Countdown 2014 in Chonburi will take place from 25 to 31 December, 2013 at the Bali Hai Pier on the southernmost part of Pattaya Beach. The evening of the 31st will be the highlight of a weeklong celebration that includes concerts by famous Thai and international musicians and a wide range of entertainment including cultural and culinary fun. The countdown will be marked with a fireworks spectacular.

Night Parade & Hat Yai Countdown 2014 from 30 to 31 December, 2013, will take place on Niphat Uthit 3, Sanehanusorn, Thammanoonvithi and Chee Uthit Roads in Songkhla’s Hat Yai district. Highlights include concerts by big name Thai artists and musicians and the B-Boy Championships. There will also be displays of Ramwong or a traditional Thai circle dance, as well as a massive fireworks display as the clocks strike 12.

Colorful Phuket Countdown 2014 from 29 to 31 December, 2013 to be held at Sanam Chai, opposite the Phuket Provincial Hall, promises a range of concerts and stage entertainment before the island’s skies are lit up with the countdown fireworks display.

Music lovers should attend the Phuket Electronic Music and Dance Festival 2014 from 30 to 31 December, 2013, on the island’s Karon Beach which is playing host to internationally-acclaimed DJs as well as several concerts that will climax in a countdown spectacular.

Last, but not least, is the Happy Family Party 2014 which takes place over a week in Khon Kaen from 25 to 31 December, 2013. Family-friendly activities are being held on Srichan Road by the ancient Khon Kaen Gate and there will be lots to see and do including the countdown fireworks display that marks the end of the old year and the beginning of the new. Dreaming of an Island Getaway