The Regional Flavors of Thailand

While most readers will be familiar with the picturesque beaches of Southern Thailand, the country is a geographically and culturally diverse one. Generally, it can be divided into four distinct regions. The Central region, which is mostly delta country with rich soil, is centered around the Chao Phraya River. Thailand’s capital and most well-known city, Bangkok, lies in this region. The Northern region is a little cooler and mountainous. The major cities here are Chiang Mai and Chiang Rai. Next is Northeastern Thailand, also known as Isan, bordered by the Mekong River and Cambodia. Isan is the largest region in Thailand. And last, though certainly not least, is the peninsula of beachy Southern Thailand. Each region has its own distinct ethnic diversity, dialect, customs and of course, cuisine. But Thailand offers way more than just your standard pad thai or papaya salad. Read on to learn more about the culinary differences between Thailand’s four major regions. 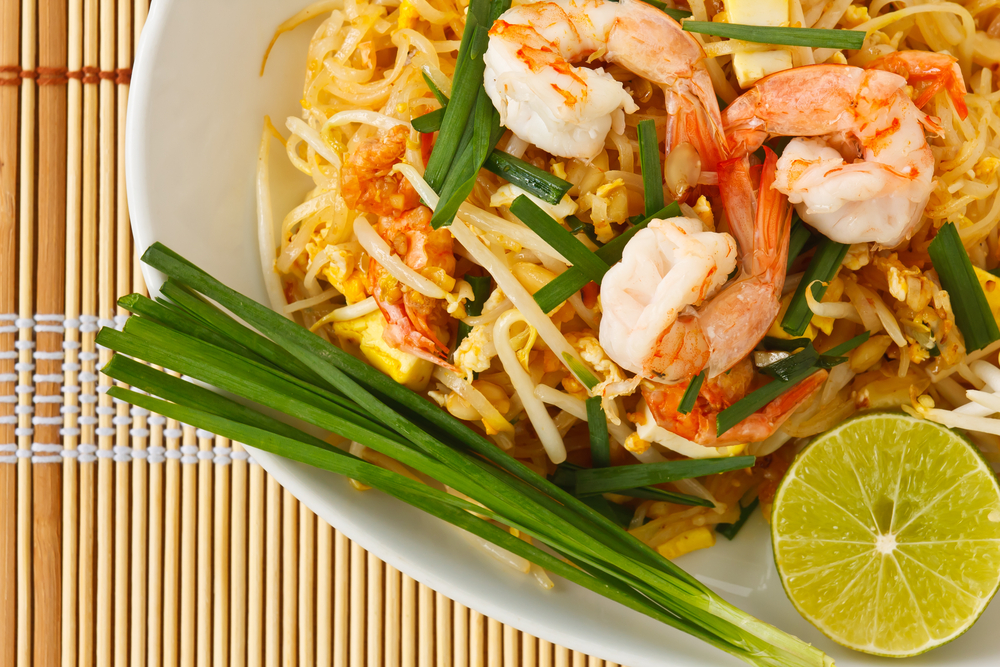 Central Thailand, home of the famous floating river market, Damnoen Saduak, just west of Bangkok, is where many of the great Thai rivers converge, making it quite fertile and ideal for growing rice. The cuisine here tends to be mild, salty, sweet and sour. Steamed jasmine rice can be served with different types of chili dipping sauces, or nam phrik, as well as soups. Shrimp soup with lemongrass, or tom yum goong, is a staple dish of this region. The Chinese influence is particularly strong in Central Thailand. It can be found in soups and noodle dishes that include tofu, ground pork and green squash. 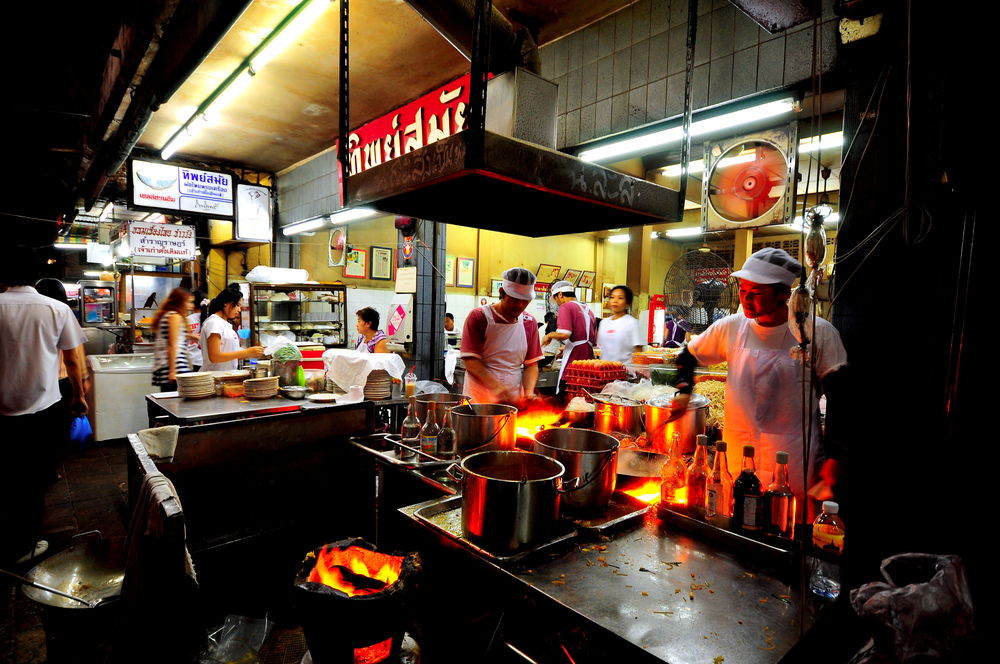 Much of the land in Northern Thailand is jungle-covered mountains and valleys, especially near Chiang Mai. Northern Thailand is also home to many hill tribes like the Yao, Hmong and Tai Yai, among others. The food in the north tends to be on the spicier side, salty and sour, though rarely sweet. Sticky rice with steamed vegetables, or nam phrik oong, is a favorite dish in the north. This region is also known for naem, a fermented minced pork sour sausage that is steamed and wrapped in banana leaf. Soups and northern-style curries are also found here. Because of the cooler mountain climate, there is a larger variety of vegetables, roots and herbs than in other regional Thai cuisines. The North is also known for having many noodle based dishes such as khao soy egg noodles, popular in Chiang Mai, which are often eaten with chicken or beef curry. 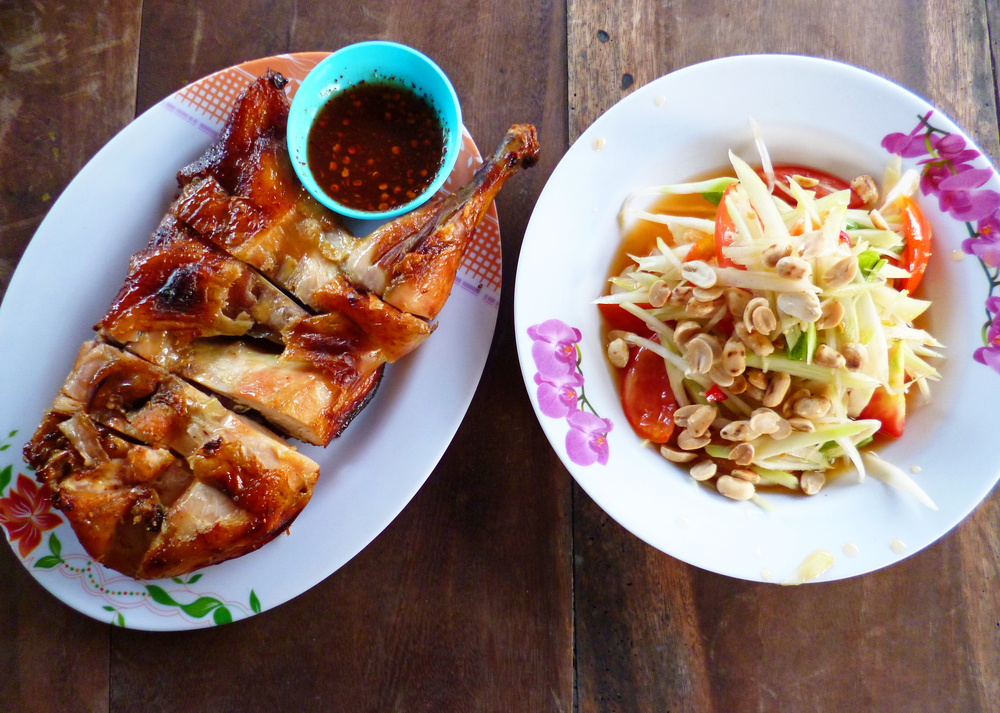 Isan, or the Northeast region of Thailand, is a high plateau with porous soil and low rainfall. Comparatively, the food is simple and traditionally eaten on a bamboo table called pa kao. The cuisine in the Northeast is known for being particularly spicy and also salty and sour. Papaya salad, or somtum, is the region’s signature dish. The green papaya is pounded with lime juice, garlic, fish sauce and many other ingredients. One variation has dried shrimp, tomatoes and roasted peanuts. Another popular dish is the kai yang, or grilled chicken. The chicken is prepared with garlic, coriander root, black pepper and fish sauce that is rubbed over the chicken before being cooked slowly over hot charcoal. While many condiments are used in this region, you won’t find as many dried spices here as you might find in the rest of Thailand. Many dishes also feature sticky rice and a spicy dipping sauce made from fermented fish and chilis, known as nam phrik pla ra. Most Isan meals are served with a spicy soup made from lemongrass, onions, kaffir lime leaves and chilis. 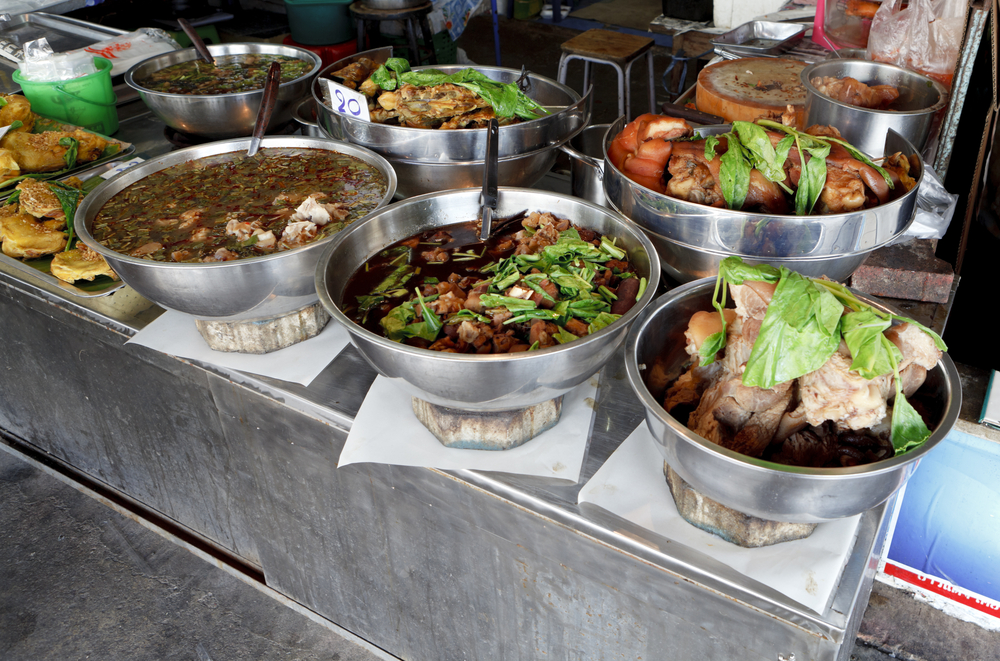 Southern Thailand tends to differ dramatically in both scenery and culture from the rest of Thailand. Craggy limestone mountains and lush jungle lands in addition to stretches of sandy beach are some of the more familiar images we’ve come to associate with this region. The climate, plus the nearly 8 months of rainfall, makes for fertile land. Large amounts of rubber and coconut are cultivated in place of the rice fields of other parts of Thailand. Coconut plays a prominent role in Southern Thai cooking. Coconut milk is used to thicken soups and curries; coconut oil is used for frying; and coconut meat can be grated fresh and used as a condiment. Cashew nuts and pineapple also have a prominent role in Southern Thai cuisine. Dishes in Southern Thailand are known for being very spicy as well as salty, sour and sweet. Due to this region being bordered by the Andaman Sea on one side and the Gulf of Thailand on the other, it’s no surprise that this region’s cuisine features plenty of seafood. Spicy curries are also very popular here, especially coconut curries and sour curries. The most common dipping sauce in this region is the shrimp paste-based nam phrik kapee, also called nam chuke, and it tends to be eaten with raw vegetables and crispy fried fish dishes.

When traveling in Thailand, remember that each of the four major regions has its own distinct way of life, culture, and of course its own particular cuisine. Regardless of what your palette prefers, you’re bound to find the right regional Thai cuisine to suit your tastes. Explore The Island of Samui